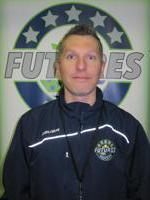 Trevor joined the organization in May, 2012 and took over the Operations Manager role in a full-time capacity in May, 2013. He subsequently took over the position of President in 2015 and has carried on in that role ever since.

Trevor is the Head Coach of the Eastman Selects Female U18 program after serving with the Selects U15 program for the four (4) previous seasons. Prior to that he coached for four seasons with the organization's female HCSS Prep team that placed 30 student-athletes in CIS and NCAA programs. His coaching career started with two seasons behind the bench with the St. Vital Victorias female U18 AA team where they won the city championship in the 2011-12 season. He also coached with the his daughter's teams from U8 to U13 where they captured back-to-back city championships in 2018 and 2019. Trevor recently completed the High Performance 1 certification through Hockey Manitoba.

Trevor played his minor hockey in the Morden Minor Hockey Association. He played two seasons of high school hockey with the Morden Mohawks where they captured the schools' first Zone IV title in his grade 11 season. He played four years of junior hockey; three seasons spent with the, now defunct, St. Claude Knights of the KJHL and one year with the Pembina Valley Twisters of the MMJHL. He spent the last five years of his playing career with the Morden Redskins of the SEMHL where they captured one league championship.

Trevor was born and raised in Morden, MB and moved to Winnipeg in 1999 to attend Red River College where he graduated with a Business Administration diploma in 2000. He spent the next 12 years in several accounting positions in both the private and public sectors.  Currently, he works with his brother in their family-owned sporting goods store, Time-Out Sports, in Winkler where he is manages the team sales division. He resides in River Park South with his wife, Kim, and their 13 year-old daughter Jalyn. 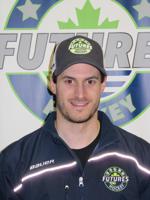 Phil joined the organization on a part-time basis in January, 2014 and became a co-owner of Futures Hockey in 2015; however, prior to that Phil was an assistant coach with the Jr Titans U14 spring program and played a key role in growing the program to where it is today. Phil was brought on to help grow the organization's current and future programming. Phil's playing days included time at the AAA level with the Winnipeg Warriors and a stint with the St. Boniface Riels of the MMJHL but his playing career was ultimately cut short due to post-concussion symptoms.

Phil is serving as the Assistant Coach is his first year with the Eastman Selects U18 Female program where he runs the forward group and the penalty kill. He holds the Development I coaching certification.

Phil is the Operations Manager for Tire Chalet and recently moved back to Winnipeg after living in Calgary for the previous four years.  He looks forward to returning to the ice in the organizations spring and summer programming. Phil and his wife, Dee-Ana, live in Windsor Park. 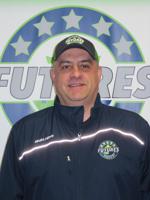 Chris joined Futures Hockey as the head coach of our U15 spring program in 2015 and added extensive coaching experience and a wealth of knowledge to the program. He was instrumental in developing the Manitoba Maple Leafs spring program and coached at both the U12 and U14 age groups.

Chris is in his first season as the Head Coach for the U15 Winnipeg Bruins Gold team after serving as the bench boss for the Eastman Selects U15 Male program for the previous two seasons. Prior to that he was the Head Coach of the Female U15 Selects for seven (7) seasons. His experience at the provincial level is equally impressive as he has served in various roles with Team Manitoba's Program of Excellence including the Video Coach (2015) and Assistant Coach (2016, 2017), Female Prospects (2015), Manitoba Games (2014), U18 Team Manitoba (2013), and the Director's Cup (2012). He holds the High Performance 1 Coaching Certification.

From 2005 to 2012, Chris coached at the U8 and U13 age groups in the Springfield Minor Hockey Association where he led two teams to provincial championships. He also held down the position of VP Sport and Development in the Association from 2009 to 2015.

Chris' playing career saw him play Junior A hockey with the Kildonan North Stars and the Winnipeg South Blues. Following that he played Senior A hockey where he suited up with the Springfield 98's. Chris is employed by Manitoba Hydro and resides in Oakbank with his wife, Michelle, and their two children - Allie and Ethan.

Kayla joins the U14 spring development program for her first season after returning home from a 4-year collegiate career with the University of Connecticut. Kayla was also an on-ice instructor for our Novice and Atom Pre-Season camp this past fall. Kayla hails from Stonewall, MB and played her minor hockey in the Stonewall Minor Hockey Association. She played one season with the Balmoral Hall Blazers JV team before joining the Shaftesbury Titans Prep and quickly became a star defenceman where she served as team captain in her Senior year. She was also a 2-year member of Team Manitoba. This past season she served as the assistant coach for the Northeast Predators Female Bantam AA program that made it to the City Finals before the season was abruptly cancelled.

Jessica returns to the program after making her debut as an assistant coach last spring. Jessica played her minor hockey in Niverville and St. Adolphe and then played for the Eastman Selects in her Bantam and early Midget years. During her Midget career she made the move to prep hockey and joined the Balmoral Hall Blazers (JWHL) in Winnipeg. She graduated from Shaftesbury High School after joining the Shaftesbury Titans Prep program for her Senior year where she was named an assistant captain. That year Jessica was also selected for U18 Team Manitoba where they went on to win a silver medal at the U18 Nationals. Following Prep hockey Jessica was offered a scholarship and spent the next four years playing D1 hockey with the University of Connecticut Huskies where she was named team captain in her senior year. Known for her fearless play, Jessica was one of the top shot blockers in the Hockey East Conference for four years running. She spent the following season playing professional hockey in Austria and recently returned to Manitoba. This past season Jessica served as an assistant coach with the St. Vital Victorias Female Peewee AA program for the second year where they finished first in the regular season.

Lauren joins our program for her first season as the goaltending coach after being an on-ice instructor with our Novice and Atom goalies during our Pre-Season camp this past fall. Lauren lives in Winnipeg, MB and most recently played for the University of Manitoba Bisons for two (2) seasons where she was named Rookie of the Year, won a Canada West title, and backstopped the team to a National Championship in her first season. Lauren played her minor hockey in the St Boniface Minor Hockey Association and began playing goal at the age of 7. She played one season with the Central Plains Capitals in the AAA MFHL which was then followed by two seasons with the Winnipeg Avros before joining the Bisons. This past season she served as the goalie coach for the Atom A1 St. Vital Chill.

You could win VIP tickets to the 2022 Premier League Mornings Live Fan Fest in Philly!HOW TO ENTER